This post is outdated, please read the new design document on GitHub.

A few months ago I released the first version of an embedded on-disk key-value store written in Go. The store is about 10 times faster than LevelDB for random lookups. I'll explain why it's faster, but first let's talk about the reason why I decided to create my own key-value store.

Why another key-value store? #

I needed a store that could map keys to values with the following requirements:

I tried to use LevelDB and RocksDB in production, but unfortunately, the observed results didn't meet the performance requirements.

The stores I mentioned above are not optimized for a specific use case - they are general-purpose solutions. For example, LevelDB supports range queries - allows iterating over keys in lexicographic order, supports caching, bloom filters and many other nice features, but I didn't need any of those features. The common implementation of key-value stores is based on tree algorithms. Usually it's B+ trees or LSM trees. Both data structures always require several I/O operations per lookup.

A hash table with a constant average lookup time seemed like a better choice. At least in theory a hash table beats a tree for my use case, so I decided to implement a simple on-disk hash table and benchmark it against LevelDB.

The index file holds the header followed by an array of buckets.

A slot contains the hash, the size of the key, the value size and a 64-bit offset of the key/value pair in the data file.

Pogreb uses the Linear hashing algorithm which grows the index file one bucket at a time instead of rebuilding the whole hash table.

Collisions are resolved using bucket chaining method. Overflow buckets are stored in the data file and form a linked list.

Position of the bucket in the index file is calculated by applying a hash function to the key:

To get the position of the bucket:

The average lookup requires two I/O operations - one is to find a slot in the index file and another one is to read the key and value from the data file.

Insertion is performed by adding the key/value pair to the data file and updating a bucket in the index file. If the bucket has all of its slots occupied, a new overflow bucket is created in the data file.

When the number of items in the hash table exceeds the load factor threshold (70%), the split operation is performed on the split bucket S:

The removal operation lookups the bucket by key, removes the slot from the bucket, overwrites the bucket and then adds the offset of the key/value pair to the free list.

Here is the benchmark results for different load factor values:

Both index and data files are stored entirely on disk. The files are mapped into the process's virtual memory space using the mmap syscall on Unix-like operating systems or using the CreateFileMapping WinAPI function on Windows.

Pogreb makes an important assumption - it assumes that all 512-byte sector disk writes are atomic. Each bucket is precisely 512 bytes and all allocations in the data file are 512-byte aligned. The insertion operation doesn't overwrite the old data in the data file - it writes a new key/value pair first, then updates the bucket in-place in the index file. If both operations are successful, the space allocated by the old key/value is added to the free list.

Pogreb doesn't flush changes to disk (fsync operation) automatically. Data that is not flushed may be lost in case of power loss. However, application crash shouldn't cause any issues. There is an option to make Pogreb fsync changes to disk after each write - set BackgroundSyncInterval to -1. Alternatively DB.Sync can be used at any time to force the OS to write the data to disk.

Pogreb supports multiple concurrent readers and a single writer - write operations are guarded with a mutex.

The API is similar to the LevelDB API - it provides methods like Put, Get, Has, Delete and supports iteration over the key/value pairs (the Items method):

Unlike LevelDB's iterator, Pogreb's iterator returns key/value pairs in an unspecified order - you get constant time lookups in exchange for losing range and prefix scans.

All API methods are safe for concurrent use by multiple goroutines.

I created a tool to benchmark Pogreb, Bolt, goleveldb and BadgerDB. The tool generates a given number of random keys (16-64 byte length) and writes random values (128-512 byte length) for the generated keys. After successfully writing the items, pogreb-bench reopens the database, shuffles the keys and reads them back. 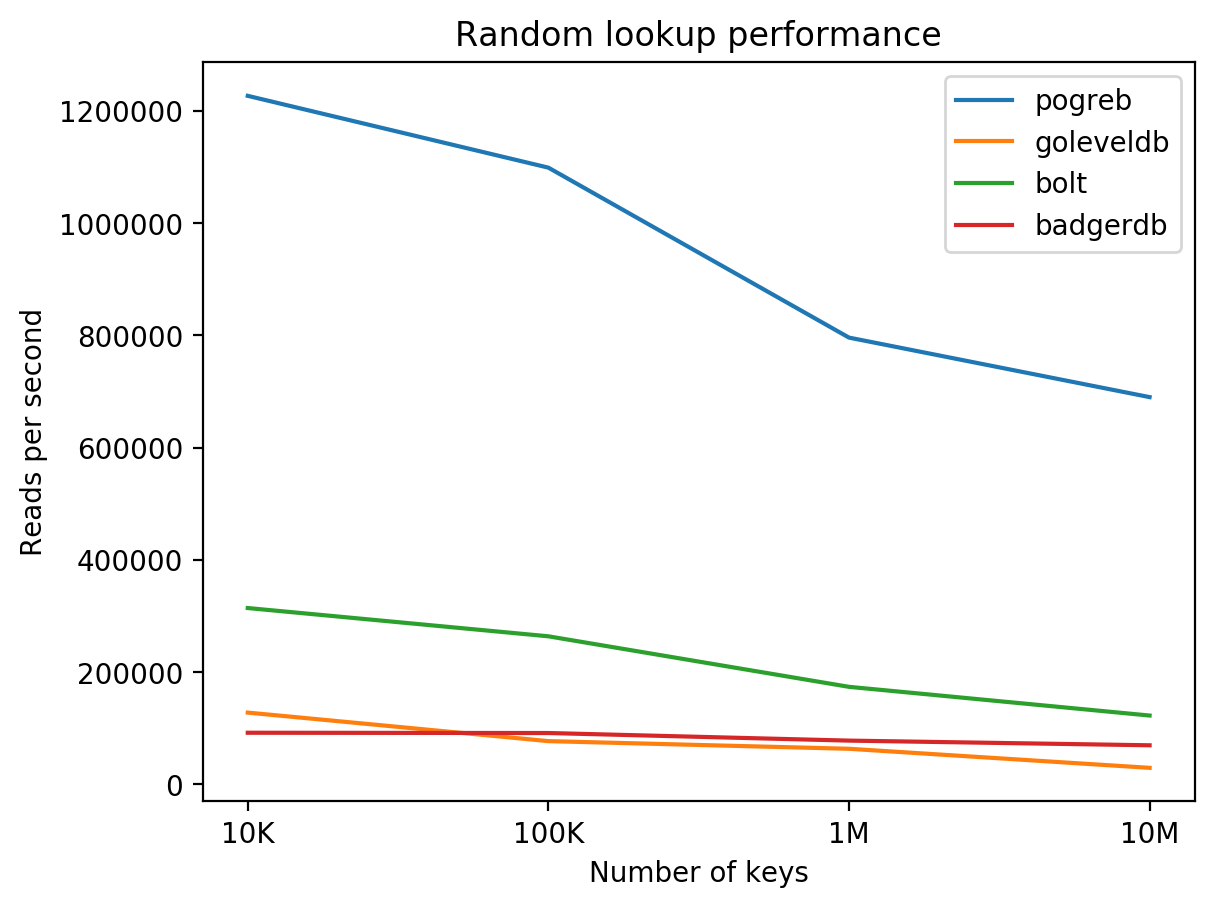 Choosing the right data structure and optimizing the store for the specific use case (random lookups) allowed to make Pogreb significantly faster than similar solutions.